One of the most delightful holiday gift products you can get the gamer in your life is the Critical Hit LED d20 from ThinkGeek. This is a large plastic d20 that blinks red red you roll a natural 20.

The LED d20 is totally awesome; however, in practice it’s not terribly practical. The die is awkwardly large and all the electronics inside make it pretty clearly unbalanced. You need a good amount of space to roll it (I’ve found the best way is to spin it in the air, since it won’t roll much on the table).

For day to day gaming the Critical Hit d20 it’s terribly practical; however, for special occasions, for GMs running one-off con games, and for showing off it’s awesomeness to your friends the LED d20 is a pretty sure-fire hit for any gamer.

I just recently discovered the amazing Artisan Dice (thanks to a comment here). This are individually machine crafted wooden dice made from fancy woods. They started as a kickstarter project trying to raise $300 to get going, and ended up raising over $90,000! 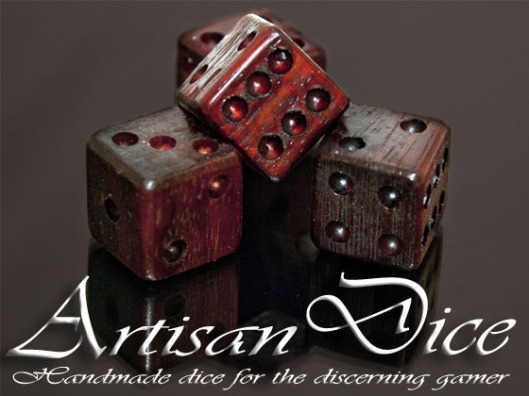 These dice ain’t cheap — right now it looks like they only sell sets of 4 six-sided dice (either regular d6 or Fudge dice) and on the cheap end they’ll cost around $30 for the four dice, and upwards of several hundred dollars for a set of four, depending on the type of wood that you want.

But holy gods, these are gorgeous dice and are absolutely worth drooling over! We can only hope that as they get up to speed they add more kinds of dice to their capabilities and start producing full 7-dice sets. Update: They apparently do sell polyhedral sets; however, I haven’t yet found where on the site you can see and buy them.

From the info on their site, it looks like they’ll sell to game stores; however, they will not sell to any online dealer. So the only place you can buy their dice online is directly through them.

I suspect that if they continue to be successful, they’ll have to make a decision whether they’re a custom dice shop, or if they’re a manufacturer — manufacturers aren’t afraid of retailers competing with them, in fact the more places that carry your product the better (because you sell more and make more money that way) while the custom shop takes a much larger cut for themselves and deals in vastly smaller volumes, and doesn’t sell to stores. Note: see the comments for a discussion with Artisan dice about selling online vs offline.